The 2014 Federation of International Lacrosse (FIL) World Lacrosse Championship presented by Trusted Choice continues from DICK’S Sporting Goods Park in Denver, Colo., this week on ESPNU and ESPN3. The 10-day, over 40 nations championship culminates with the semifinals and championship games televised on ESPNU on Thursday, July 17 and Saturday, July 19. Read More… 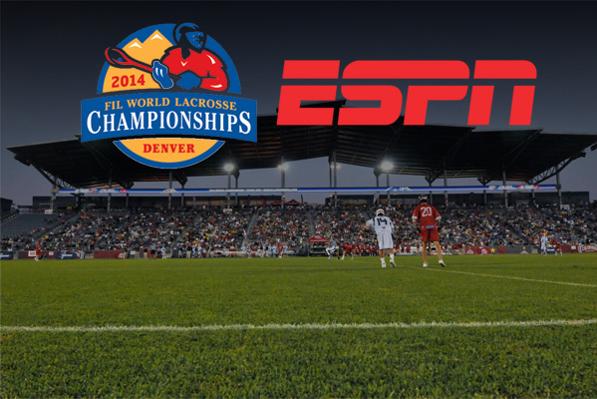 The 2014 Federation of International Lacrosse (FIL) World Lacrosse Championship presented by Trusted Choice continues from DICK’S Sporting Goods Park in Denver, Colo., this week on ESPNU and ESPN3. The 10-day, over 40 nations championship culminates with the semifinals and championship games televised on ESPNU on Thursday, July 17 and Saturday, July 19.

Team USA plays tonight (Monday, July 14) against Team England, and again on Tuesday, against the Iroquois Nation – both games televised on ESPNU at 7 p.m. The consolation and quarterfinal rounds tip off Wednesday, all on ESPN3.

ESPN3.com in Australia and New Zealand, the live streaming service available to ESPN television subscribers, will also carry complete live and on demand coverage of the World Lacrosse Championships throughout the tournament.ESPN Player – the company’s sports streaming service for more than 50 countries in Europe, the Middle East and Africa – is also launching a special channel to cover the World Lacrosse Championships.  ESPN Player – World Lacrossewill have exclusive coverage of 43 games from the tournament across the region, including all pool games for the world’s top six teams (USA, Canada, England, Australia, Japan and Iroquois Nationals), both semi-finals and the final.