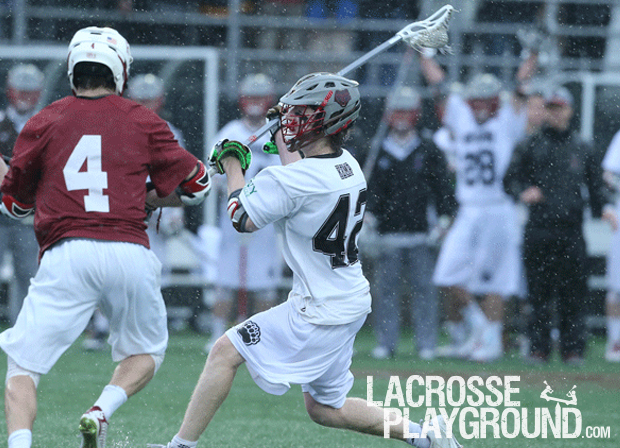 The Ivy League Player of the Year, Molloy tied the Brown single season record for goals with 59, while handing out a team high 30 assists. Molloy’s 3.69 goals per game leads the nation and he ranks third nationally in points (5.56 ppg). He is one of 25 players nationally to be named a Tewaarton Award nominee, given to nation’s top player.

Considered one of the top long stick midfielders in the nation, Kemp ranks second in the Ivy League and fourth in the nation with 2.13 caused turnovers per game, and 27th nationally in ground balls (4.87 per game). Kemp earned second team All-Ivy honors. He was named the Ivy League Player of the Week for the second time and was heralded as the National Defensive Player of the Week by the Baltimore Sun following Brown wins over Marist and #9 Princeton.

Tulett emerged as a force as a close defenseman for the Bears and leads the Brown team in ground balls (5.06 per game), 24th nationally. He picked-up a game high seven ground balls in the Ivy League Tournament vs. Yale. Tulett had a game-high eight ground balls in Brown’s win over #10 Cornell and registered three caused turnovers vs. Bucknell and four vs. Manhattan. Tulett picked up six ground balls vs. both Princeton and Marist.

Gural is one of the top face-off men in the nation and ranks 12th nationally in face-off percentage at .597. He was spectacular in Brown’s Ivy Playoff game vs. Yale, capturing 16-of-20 face-offs against the Bulldogs. Gural excelled in the face-off x vs. Princeton, giving the Bears a 12-9 advantage. He is second on the Brown team and ranks 25th nationally with 5.17 ground balls per game. Gural captured 16-of-25 face-offs vs. Harvard, including 8-of-9 in the fourth quarter.

Tiffany was named the New England Coach of the Year for the third time in his career after guiding the Bears to the Ivy League Championship and number one seed in the Ivy League Tournament. His Brown team lit up the scoreboard in 2015, scoring 228 goals, fifth best in the nation. Tiffany, now in his 10th year as head coach of the Bears, has guided the Bears to the Ivy Championship, three times, in 2008, 2010 and 2015, and NCAA Championship berths in 2009 and 2015.