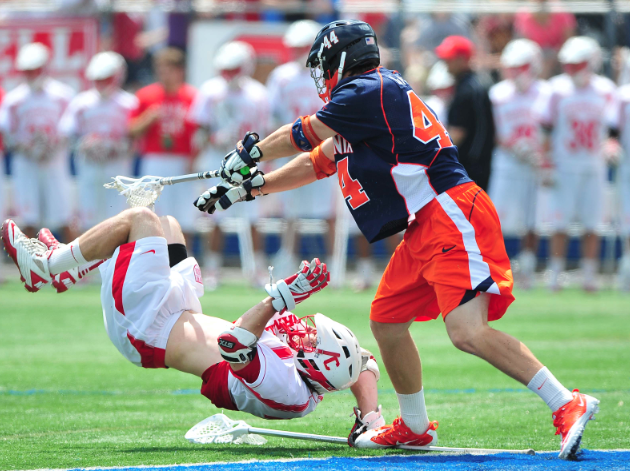 “I am very pleased to announce today that Chris LaPierre will serve as our captain for the 2012-13 academic year,” said Starsia. “I can still remember sitting with Coach [Marc] Van Arsdale at an all-star game in the summer after Chris’ senior year in high school and remarking that this is the caliber of young man we would want as the face of the program. From the day he walked in to the locker room, he has been among the hardest workers and most competitive athletes on the team. His play at the very end of our playoff game with Princeton in 2012 speaks to his fearless and selfless instinct. At the same time, it has been a great joy to watch him grow as a leader among his peers.”

LaPierre, a senior from Medford, N.J., is a two-time USILA All-American, earning third team honors in 2011 and second team honors in 2012 as a short-stick defensive midfielder. He also was named All-ACC in both of those seasons, while leading UVa in ground balls during each campaign.

The last time UVa had only one captain was 1981 when Starsia’s predecessor, Jim Adams, named Steve Kraus captain. LaPierre becomes the 34th solo captain in UVa men’s lacrosse history, dating back to the 1925 season and only the sixth since 1968.

Only twice prior has a Starsia-coached team at UVa have as few as two captains – the 1995 squad (Harmar Thompson, Joe Wilson) and the 1998 team (Tucker Radebaugh, David Wren).

Starsia is excited for the leadership LaPierre will bring this season.

“When your best players are among your hardest workers and when they demonstrate a willingness to assume the considerable responsibilities that accompany leadership in a team sport, you like your chances going forward,” said Starsia.

I know Chris and his family, and have officiated games he’s played in, and UVA could not have chosen better. He came to the program a fine athlete and young man, and will leave an even better man. The right person in the right program…congrats to both.