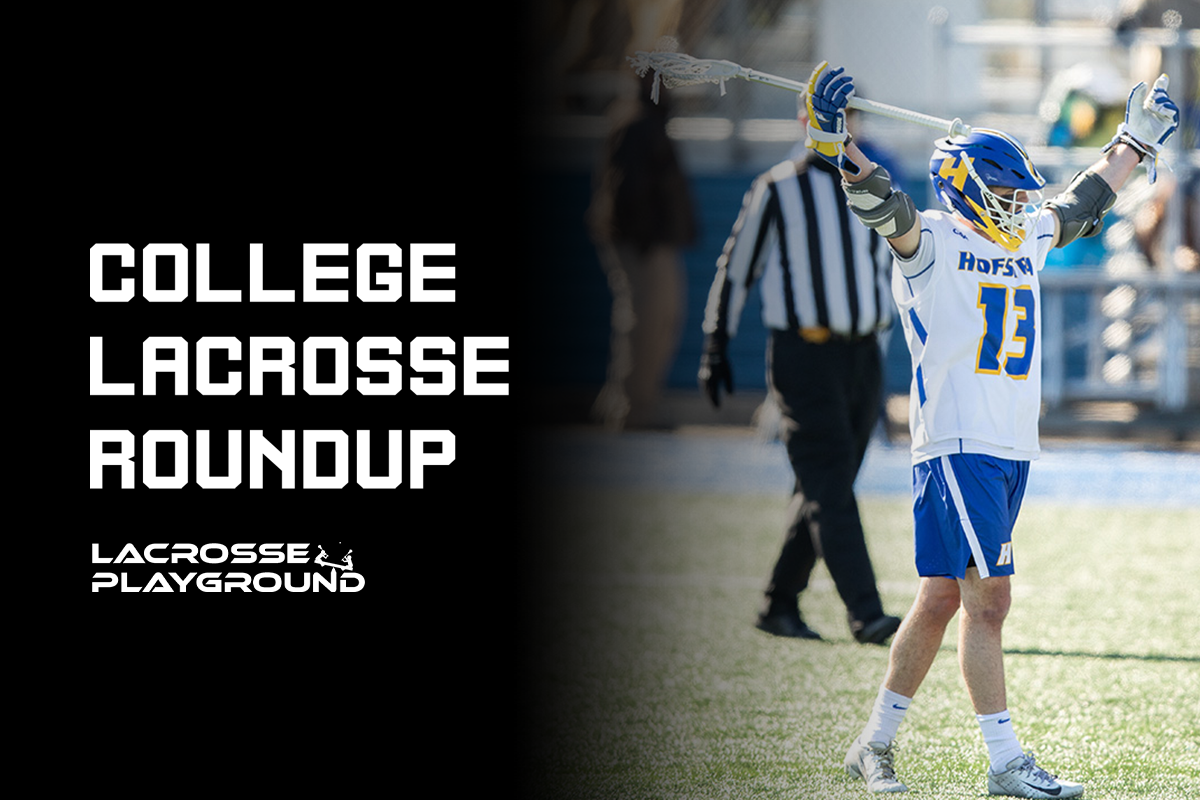 Ryan Tierney had a pair of hat tricks in the 18-6 beatdown against Wagner this past Tuesday. With these goals Tierney broke Curtis Dickson’s CAA points record (212) as well as Tom Kessler’s goals record at Hofstra (140). Tierney now has 216 points (144 G, 72 A) and is in sight of Curtis Dickson’s CAA goals record which stands at 162, as well as the Hofstra points record at 238.

St. Bonaventure gets their first win in program history

The Bonnies finally got the monkey off their back after two years (2019 and the shortened 2020) and got their first win in the program’s history beating Quinnipiac 13-6. The Bonnies were led by Austin Blumbergs who had six points with three goals and three assists (and who I had the pleasure of playing travel lacrosse with for two years while we were in high school.) The Bonnies were also helped out by Jake Rosa who had five points (2 G, 3 A) and Sean Westley who added on four (2 G, 2 A). Brett Dobson was a stud in net, making 14 saves on 20 shots for a 70% save percentage. The Bonnies will travel to Detroit Mercy on March 13, while Quinnipiac will travel to play Marist.

The Orange offense continues to thrive and it was evident on this beautiful assist from Stephen Rehfuss to Jamie Trimboli.

With a sudden-victory win on the line, Colgate went for the kill in the closing seconds of overtime and it payed off in the form of a Jacob Sposita buzzer beater.

Charlie Kitchen delivered a highlight-worthy goal for Delaware, going top corner by way of this BTB beauty on the crease.

Jackson Reynolds and TJ Malone must share some telekinetic connection because Reynolds delivered an unreal, backhand feed right to Malone who buried it for a goal.

TJ Malone led the Nittany Lions with seven points (5 G, 2 A) followed by Dylan Foulds who had four goals, while Mac O’Keefe added a hat trick as well. Jackson Reid led the Buckeyes with three points (2 G, 1 A) along with Griffin Hughes who had the same. Tre LeClair and Jack Myers both added hat tricks in the loss to Penn State. Penn State will travel to Johns Hopkins to take on the Blue Jays on March 13 while the Buckeyes will host their foes in Michigan for “the game” on March 13 as well.

Lehigh was led by Tommy Schelling who had five points (2 G, 3 A) along with Cole Kirst who added two goals. But the spotlight was on Mike Sisselberger who went 84% from the stripe, which is unheard of. Loyola on the other hand was led by Peter Swindell who had three points (2 G, 1 A) as well as Kevin Lindley who added a pair of goals. Lehigh hopes to keep their 2021 vibes rolling as they will travel to Bucknell on March 14, while Loyola will head back to the drawing board when they play hosts to Lafayette on March 13.

Colgate was led by Mike Hawkins who had six points (4 G, 2 A) followed by Michael Minicus, who added a hat trick. Brendan Jordan (1 G, 2 A), and Jacob Sposita (2 G, 1 A) also added three points apiece in the win over Holy Cross. Dean DiNanno and TJ Lynch led Holy Cross with four points a piece (3 G, 1 A), followed by Jayce Lambert who had three points (2 G, 1 A). Colgate will travel to West Point to take on Army on March 13 while Holy Cross will host Boston University March 12.

Sydney Watson led UConn to victory over UMass with six goals followed by Kate Shaffer who added a hat trick herself. Maddy Moloney (3 G, 1 A) and Kelly Marra (4 G) each added four points a piece in the loss to UConn. UConn’s Landyn White had 13 saves on the day, and was pivotal in the win. These two teams will face off against each other again except in Massachusetts on March 13.

Virginia was lead by Maggie Bostain (3 G, 1 A) and Taylor Regan (1 G, 3 A), who each had four points in the win over Louisville, followed by Aubrey Williams and Mackenzie Hoeg, who each added two goals and an assist in the win. For the Cardinals on the other hand, Caroline Blalock had five points (2 G, 3 A), Hannah Morris followed with four goals and Alex McNicholas and Allegra Catalano each had a pair of goals. Virginia will host George Mason on March 10 to see if they can improve to 5-0, while Louisville will travel to Central Michigan on March 12.

Sarah Falk led the Great Danes with five goals, followed by Ally Alliegro who had four points (1 G, 3 A) and Bryar Hogg who added a hat trick in the OT win over New Hampshire. Julia Neyland led New Hampshire with five points (4 G, 1 A) followed by Rylee Leonard who had four points (1 G, 3 A) and Sabrina Grovom and Liv Dunn each had a pair of goals in the loss. UAlbany will host Hofstra on 3/9, while New Hampshire will travel to play Vermont on 3/13.

Chris Gray leads the nation with 40 points on 24 goals, as well as adding 16 assists thus far into the 2021 season. In the Tar Heels most recent bout against Mercer, Gray had 10 points (6 G, 4 A). In my opinion, Chris Gray is a much bigger asset to North Carolina than Michael Sowers is to Duke.

Michael Sowers is now tied for seventh in the nation for points with 27, adding 10 goals and 17 assists in the 2021 season. In the Blue Devils’ most recent win against Richmond, Sowers added five points (3 G, 2 A). Since this Duke Blue Devils team is loaded with an enormous amount of talent, Sowers doesn’t need to have his 11 and 14 point games like he did at Princeton; an easy five points will do the same amount of damage.

Ryan Tierney is currently third in the nation with points at 30, adding 23 goals on seven assists. Tierney most recently broke the CAA points record and is looking to take down two more records before the year is up. Watch Tierney potentially continue to sneak up on the list.

Sorana Larson is a new addition to the list as she climbed to the top of leaderboard, tying North Carolina’s Jamie Ortega with 32 points on 25 goals and seven assists. In UC Davis’ most recent game, Larson had four points (2 G, 2 A) in a loss against USC. Keep an eye out for Larson as they travel to Fresno State on March 13.

Another new addition to the list is Colleen Grady who is also tied with Ortega and Larson with 32 points on 18 goals and 14 assists. In Drexel’s dominant win over Villanova, Grady added eight points, going an even four and four in goals and assists. Drexel will play host to UAlbany on March 14.

Jamie Ortega is currently tied for first in points with UC Davis’ Sorana Larson with 32 points on 22 goals and 10 assists. Ortega will look to get on top of the board when the Tar Heels travel to Virginia Tech for back-to-back games on March 11 and March 13.

What to Watch this Week by Lacrosse Reference