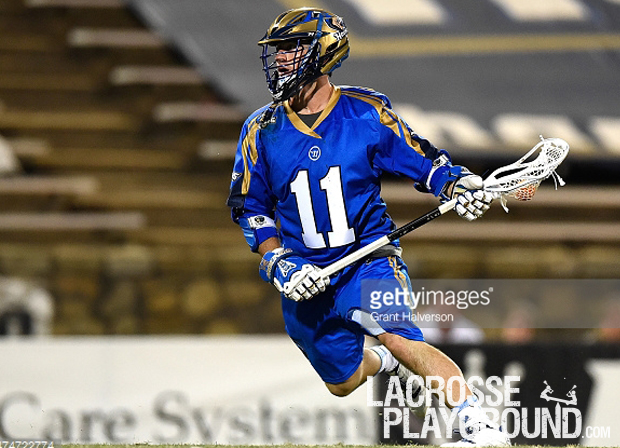 CHARLOTTE, NC (May 27, 2015) — Major League Lacrosse today announced its weekly award winners for Week 7 of the 2015 season, naming the Charlotte Hounds’ Joey Sankey Cascade Rookie of the Week. Sankey (Attack, North Carolina) made his MLL debut in Saturday’s 19-13 loss to the Boston Cannons.

“It’s a huge honor to be named Rookie of the Week in my first game in the MLL,” said Sankey. “You really don’t know how your game will adjust to the next level of competition and it was a great confidence booster.”

On Saturday, Sankey scored five of the Hounds’ 13 goals and added three assists. His eight points tied the Hounds’ single-game record, originally set by Ryan Young (7g, 1a) in 2013. It took some time for the rookie to adjust though, as seven of his points didn’t come until the second half. Sankey was the bright spot in an otherwise disappointing performance for the Hounds.

“I was happy with my performance, but I felt like a struggled a little bit in the first half,” said Sankey. “It took me a little while to adjust to the new pace and style of the MLL and it’s something I will have to keep adjusting to. But the shot clock was not too difficult because our offense at UNC played at a very fast tempo so it’s not too drastic of a change.”

This is the third time this season that a Hounds player has been selected for a weekly award. Brendan Fowler was named FOAthlete of the Week, Presented by The Faceoff Academy, in Week 1 and Kevin Drew was selected as Warrior Defensive Player of the Week at the conclusion of Week 3.

“My goal is that our team continues to improve and that we start consistently winning,” said Sankey. “Individually, I would like to be a consistent contributor on this team and eventually, some day, make it to the All-Star Game.”

Sankey and the Hounds (1-5) continue their home stand this weekend, welcoming the undefeated New York Lizards (6-0) to American Legion Memorial Stadium on Saturday, May 30. Faceoff is scheduled for 7:00pm ET, with a special pregame ceremony beginning around 6:50pm. Tickets are available at www.charlottehounds.com/tickets