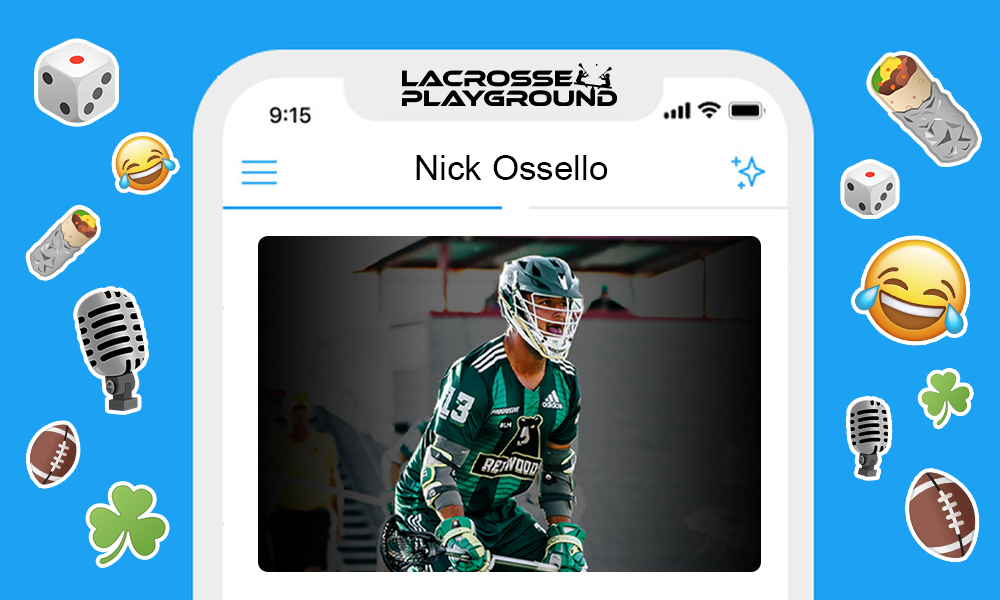 When you head to most professional athletes’ social media feed, there are some things that you are almost guaranteed to see. Workout and nutrition tips and videos seem to always top that list. However, if you’re perusing the Twitter feed of Redwoods LC’s Nick Ossello looking for new recipes, cool new workouts or wondering what the former two-sport athlete at Notre Dame does in the gym or on the turf, you’re in the wrong place.

You’ll instead find memes, self-deprecating jokes and Ossello’s signature #PostiveFriday compliments. In fact, the closest thing you’ll get to nutrition advice is his Chipotle order located in his Twitter bio.

“I don’t think that [posting] workout videos shows authenticity,” Nick Ossello said. “That shows that you can be trained and disciplined. I’m working out as much as the next guy, but the authenticity and why I think the lacrosse community is great is never because we’re getting together and exchanging workout ideas.”

The lack of workout videos doesn’t mean Ossello hasn’t been putting in the work in the gym. As the Redwoods midfielder prepares for the upcoming PLL season, he has been drawing on his past experiences as a two-sport athlete.

A stand-out lacrosse and football player at Wheat Ridge High School in Wheat Ridge, Colorado, Ossello admittedly came into his own as an athlete between his sophomore and junior year.

“I can’t emphasize enough how much I grew between my sophomore and junior year,” Ossello reflected. “I was basically scraping time on varsity as a sophomore. Then as a junior to step out onto the field, not necessarily as a great lacrosse player, but a great athlete, that gave me all the confidence in the world.”

That big-time offer didn’t appear for Ossello, but luckily the Notre Dame lacrosse team gave him an opportunity late in the recruiting process.

Nearing the end of his time as a part of the lacrosse program, he learned of an NCAA rule that allowed for a fifth year of eligibility to play a different sport. Taking his interest in playing football again and pairing it with a few connections at Notre Dame, Ossello found himself on the gridiron once again, very quickly after seeing his lacrosse tenure at Notre Dame end in the 2015 NCAA Final Four in Philadelphia.

“Two days after we lost to Denver in that semi-final, I found myself on the football field doing the 40, doing shuttles, doing the bench press, all while trying to impress the football coaches,” Ossello said. “After that workout, they officially offered me a preferred walk-on spot.”

That season, Ossello and the Fighting Irish finished the year 10-3 before falling to Ohio State in the Fiesta Bowl.

With football done, Ossello, a draft pick of the Chesapeake Bayhawks in 2016, turned his attention back to lacrosse joining the MLL, beginning his professional lacrosse career. Fast forward to 2021, Ossello is preparing for his fifth professional outdoor season. Both the MLL-PLL merger and recent influx of football professional players joining the league means roster spots will be scarcer than ever before. Yet, that doesn’t worry Ossello. Instead, he laughs off the extra competition and smugly reminds everyone that he’ll still be the only person to play in both the PLL and a college football playoff game.

For Ossello, humor has always been an important part of lacrosse, but recently it’s been what’s seemed to separate him from the crowd.

“I’ve always said the best part about lacrosse, especially professional lacrosse, is you’re making some of the best memories you’ll ever have in your life and so many of these guys are quite frankly just hysterical,” Ossello said. “Not to knock anybody’s social media, but the way that I want to utilize it is to go on and to make people laugh… I try to reflect that ball-busting authenticity that I think is very prevalent in the lacrosse community, but isn’t necessarily highlighted on a lot of social media accounts. I hope that resonates with people.”

His personality, sense of humor and ability to connect with people led to Ossello launching The Post Game Podcast with former Syracuse goalie Evan Molloy in December.

“What we align on is going online to shoot the breeze and make people laugh,” Ossello explained. “I’ve actually never met him in person, but we have a producer and they knew each other and they just saw me as a guy that matches Evan’s schtick on social media. I thought it’d be fun to do.”

Bringing his goal for social media full circle, Ossello set out to make the podcast a collection of stories to showcase the personalities of the sport.

“When you look at the lacrosse podcasts out there, you ask ‘where are the guys who have achieved success who are not taking themselves seriously?’ I don’t really see it; let’s start it.”

And so far the reception he’s gotten has been a positive one (just don’t ask him to break any hard-hitting lacrosse news stories anytime soon).

When he’s not cranking out episodes, jokes (or reps in the gym to prepare for the upcoming season—because he does indeed do that, it’s just not posted online), the Colorado native is hitting the road in an adventure van to take lacrosse to the “budding lacrosse communities across the world” with CLNC sports.

The idea for the van touring lacrosse clinic model now known as CLNC began to take form over a weekend of beverages and conversation with former college teammate, Connor McCollough, in Boise, ID, where Ossello was running a clinic at the time. McCollough, who was living in an RV while working full-time at GE at the time, paired his knowledge of RV life with Ossello’s current coaching chops, bringing CLNC to life.

A Colorado native, Ossello had seen the lack of lacrosse outside of his home state in several large parts of the western United States and wanted to make sure he was able to service those communities dying for some kind of lacrosse.

“When I was in Boise, I think at the time it was me, Jordan Wolf, and maybe Myles [Jones] and Kyle Harrison as the only guys that operated clinics there,” Ossello commented. “They’re craving lacrosse. They’re a phenomenal little lacrosse community out there. We’re trying to identify the Boise’s, the Missoula’s, the Jackson, Wyoming’s, and Hood River, Oregon’s. We’re trying to provide them what I was given as a kid with the Mammoth, the Outlaws and DU in my backyard.”

Despite having some difficulty navigating last spring and summer due to COVID-19, the experience of taking lacrosse to these non-traditional cities has been much different than running clinics in a lacrosse crazed area for Ossello and company to say the least.

“Some of the communities we go to, lacrosse is so new that they don’t even know lacrosse exists at the collegiate-level, let alone professionally,” Ossello said. “There’s really two buckets. You’ve got those communities that don’t know anything, so that when you send out registration, we have to send out videos and information that says ‘Hey this could be a great way to get out and run around and get into a great school like Notre Dame if your academics wouldn’t alone,’ or so I heard from a friend. And then there are the die-hard communities, like Boise, that are just craving lacrosse.”

This spring and summer, Ossello and the CLNC crew hope that, as the world begins to open back up and restrictions ease, they will be able to continue spreading the game of lacrosse to these under-served lacrosse areas. He also hopes that his work can help pave the way for the athletes he’s coaching to maybe one day join the CLNC team.

“I can’t imagine doing much else. My life is traveling around coaching lacrosse and seeing some of the most beautiful places in the world. I know when my time is done [playing professionally], I’d like to facilitate that for this next batch of players. Hopefully, in the future, you can sign coming out of college with CLNC Sports, balance the PLL, coach, travel and really make lacrosse your full-time job and something you’re proud to have on your resume,” Ossello said.

At the end of the day, whether it’s coaching, playing, podcasting or social media, Nick Ossello is enjoying the moment and using the tools that he has at his disposal.