Nike, the leader in sport innovation, has teamed up with Syracuse men’s lacrosse for the debut of the Nike Fast Break uniform. The Orange will be the first team to wear the new uniform when it takes the field against No. 7 Notre Dame tomorrow at the Carrier Dome. Read More… 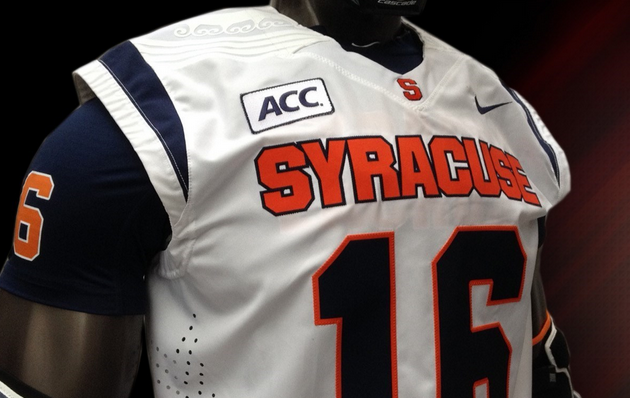 SYRACUSE, N.Y. – Nike, the leader in sport innovation, has teamed up with Syracuse men’s lacrosse for the debut of the Nike Fast Break uniform. The Orange will be the first team to wear the new uniform when it takes the field against No. 7 Notre Dame tomorrow at the Carrier Dome. Click for full ESPNU Lacrosse Lineup this Weekend, ACC and Johns Hopkins.

The Nike Fast Break uniform is the company’s lightest lacrosse uniform to date. It features a sleeveless jersey for increased shoulder mobility and is 17 percent lighter than the current Nike Vapor jersey. The new uniform shorts are eight percent lighter than the Nike Vapor shorts, and like the jersey, are made with four-way stretch woven fabric for added freedom of movement. Mesh panels on the back, zoned perforations under the arms and zoned mesh down the sides of the shorts have been implemented for increased cooling and breathability.

The new jerseys are white with “Syracuse” inscribed in orange across the chest and navy blue numbers in orange trim. In a unique touch, the jerseys feature an image of the Syracuse University Hall of Languages façade woven into the fabric on the shoulders and the program’s “Head, Heart, Hustle” motto is found inside the collar.

In addition to the uniforms, Syracuse will don new navy blue Cascade R helmets. Similar to the Syracuse football helmets debuted in the fall, the navy blue fades into chrome orange on the helmet’s back panels. They feature SU’s signature block “S” logo in chrome orange on the sides. As part of the custom design, the letters HHH adorn the stainless steel facemask in another nod to the program’s “Head, Heart, Hustle” mantra.